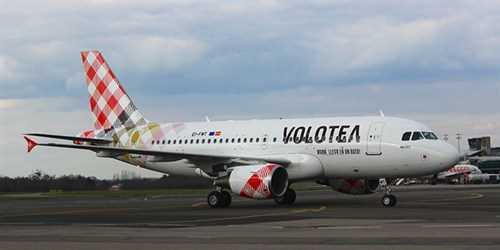 1st July, 2019 - Volotea, the airline of mid and small-sized European cities, has implemented a set of measures that include the coordination of flight operations, new and improved passenger services and new additions to the onboard experience that will improve customers’ satisfaction and travel experience. The company has invested 15 million euros to launch these improvements ahead of the summer 2019.

Volotea carried 6.6 million passengers in 2018, an increase of 36% on the previous year. Following this strong growth, the airline has implemented an ambitious improvement plan with a focus on its customers’ needs.

To do this, operational improvements have been made in order to remain high in the European punctuality rankings; new channels of communications with clients have been introduced; presence at airports has been reinforced and passenger booking process and flight experience have been improved.

A total investment of 15 million euros has been carried out to put these initiatives in place in a coordinated manner, adding value to an attractive, innovative and dynamic offer.

We value our customers’ time

This year, Volotea has added six additional Airbus A319 aircraft, for a total fleet of 36 aircraft. Two of these additional aircraft will act as back-up to support flights of the fleet assigned to operate each route. These two aircraft, for a total of four strategically located in France, Italy and Greece, will work as resources to allow a faster response when needed.

This year, Volotea is also reinforcing their cabin crews who will stand as back-up at the bases. With a 50% increase in back-up crew staff, activation time will be 33% faster.

Volotea has also invested in an ambitious flight protection programme that will significantly reinforce the integrity of its operations in the event of possible problems caused by European air traffic space congestion during the summer months.

Volotea has designed a special plan during the six most critical summer weeks, and a more spread out schedule will be in place for a more efficient flight management. This model includes the implementation of “firewalls” dividing daily operations in two halves to avoid the propagation of operations.

Volotea is also reinforcing its maintenance team, its logistic resources, which will be available 24/7, and will have their own additional engines.

As well as extra teams in the Operations Control Centre, Volotea has acquired new and powerful analysis tools that will provide real-time analysis of all parameters of operations and are able to learn from similar situations happened in the past, which will facilitate decision making.

From June 1st, new Volotea priority boarding service is available. Passengers requesting this service are able to board first through specific queues. These passengers will be also allowed to take their cabin luggage onboard.

Volotea is also launching an Android version of its app, which can be downloaded in the Play Store, free of charge. The app is also available for iPhone. The functionalities of both apps have been improved and customers can also search for flights and manage their bookings.

Volotea call center services have also been enhanced and an advanced contact-management tool and additional communication channels have been implemented. A multichannel support service is now available and access via Webchat, WhatsApp and Facebook Messenger provide faster, direct and more personalised communication. From 15th May to 30th September, Volotea is also expanding its customer services opening hours, which are now from 7 a.m. to 10 p.m.

Volotea has also increased its benefits for its most loyal customers with improvements to the Megavolotea loyalty programme, which has more than 200,000 members. New discounts, more communication channels and an exclusive customer service phone number are the main added benefits. Megavolotea Plus customers will also be able to use the new Priority Boarding scheme free of charge.

Improvement to the onboard experience

This summer, Volotea is also expanding the onboard entertainment service in all its Airbus A319 aircraft. Volotea has improved the service browsing interface making it easier to access the wide range of films, box sets, television programmes, newspapers, magazines, flight information, music and content for the little ones.

Throughout its Airbus A319 fleet, Volotea has also installed a sustainable LED lighting system that represents a qualitative improvement for its passengers, as well as saving energy and maintenance costs. This LED lighting system improves in-flight comfort. Cabin crews can choose among nine different types of light, in order to adapt it to time of day and stage of the flight.

Unlike other low-cost companies, Volotea has large reclining seats in its aircraft, arranged in rows that are 5% wider than European average. This increases passengers comfort onboard. Volotea fleet’ seats have been awarded with the Best Seat recognition in the 2018 Hamburg fair.

Volotea, the airline of European mid and small-sized cities, has carried more than 22 millionth passengers since its first flight in 2012 and 6.6 million in 2018.

Volotea operates its network with 36 aircraft in 2019. Its fleet includes Boeing 717s and Airbus A319s