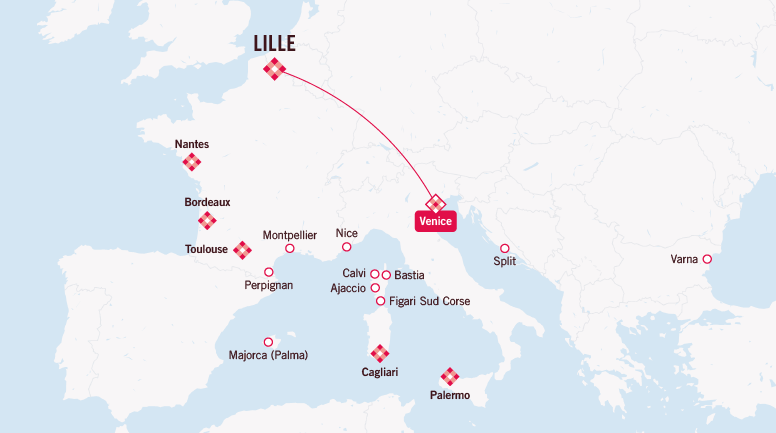 ONE WEEK AFTER THE OPENING OF ITS BASE, VOLOTEA LAUNCHES A NEW ROUTE TO VENICE FROM LILLE

Volotea adds a new route to its offer and will propose a total of 16 destinations in 2022. It is the leading airline in terms of destinations from its Lille base.

The airline will offer more than 7,560 seats on this new route, which will connect the north of France to Venice twice a week, with departures starting in October.

Press release, April 8, 2022 - As of today, Volotea launches a new route to Venice from its Lille base for departures starting October 21, 2022.

With this new and third route to Italy, the European regional capitals airline offers its customers in the Hauts-de-France region direct access to Venice.

From October 21, 2022, Volotea will operate twice a week (Mondays and Fridays) the Lille - Venice route. A new route on which the company will offer more than 7,560 seats.

In 2022, Volotea will serve a total of 16 destinations, including 7 new ones launched this year: Cagliari, Calvi, Palma de Mallorca, Palermo, Split, Varna, and Venice.

Tickets will go on sale in France on April 8, 2022, through all distribution channels and on the Volotea website: www.volotea.com.

This year, the airline will offer 16 destinations from Lille airport in 5 countries: Spain (Palma de Mallorca), France (Ajaccio, Bastia, Bordeaux, Calvi, Figari, Montpellier, Nantes, Nice, Perpignan, Toulouse), Italy (Cagliari, Palermo, Venice), Bulgaria (Varna), and Croatia (Split) Volotea has carried nearly one million passengers to and from Lille since 2012. The company, number one in terms of destinations from Lille, plans to offer this year 500,000 seats from its Lille base.

In 2022, Volotea plans a historic development in Europe and France will now represent 50% of the company's activity, with a forecast of more than 5 million seats, up 54% from 2019. The airline, which is celebrating its 10th anniversary in France this year, has opened a new base in Lille on April 1, 2022. Volotea intends to play a key role in the economic and social development of the territories, by creating jobs in the regions where it operates with more than 150 new indirect local jobs, and a total of more than 600 Volotea employees, in France, by 2022.

"We are pleased to announce the launch of this new popular Italian destination from Lille Airport. We are committed to offering our passengers more choices for their travels and this new route from Lille illustrates our ambition to develop the French market", says Céline Lacroix, Volotea's International Development Manager.

Marc-André Gennart, General Manager of Lille Airport SAS, said: "We are constantly looking for new destinations to offer our passengers. Venice remains one of the most attractive destinations in the world and we are delighted to add it to our destination map. It is also a destination that requires a quality schedule and the flight days (Monday and Friday) proposed, testify to Volotea's desire to offer the best service to its customers from Lille. Thanks to these schedules, travelers can easily organize a long weekend or a short stay during the week. Volotea will be the only airline to offer this destination from Lille Airport.