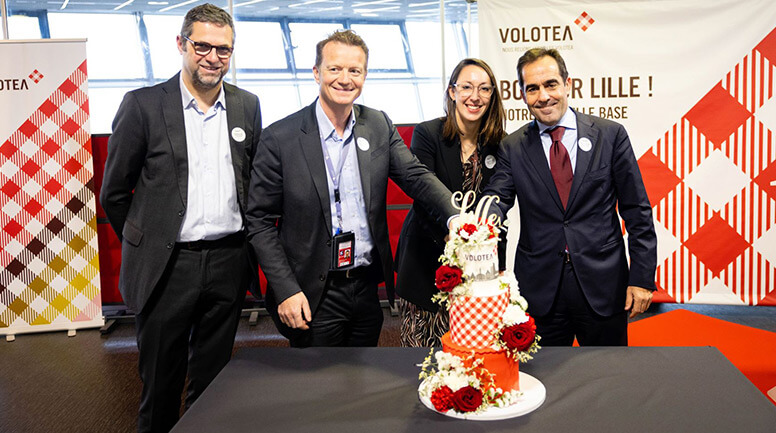 In 2022, Volotea is the largest airline operating out of Lille, with 15 destinations, including six new ones for the summer which will connect northern France to Cagliari, Calvi, Palma de Mallorca, Palermo, Split and Varna.

Press release, 1 April 2022 - Volotea has opened its new base at Lille Airport today. It is the largest airline operating out of the airport, with 15 destinations, including six new ones launched this year: Cagliari, Calvi, Palma de Mallorca, Palermo, Split and Varna. By setting up in Lille, Volotea will directly create 30 new local jobs and will indirectly create 25 jobs.

With this new base, Volotea is expanding its presence in Lille and will offer a total of 491,000 seats across its 15 destinations. Volotea is also the only airline to serve Montpellier, Perpignan, Cagliari, Palermo, Varna, and Split from Lille Airport in 2022.

Starting from 2 June 2022, Volotea will operate the Lille - Cagliari route once a week (Thursdays). The company will offer approximately 4,368 seats on this new route.

Starting from 4 June, Volotea will operate the Lille - Calvi route once a week (Saturdays). The company will offer 6,000 seats on this new route. This new connection between Lille Airport and Calvi-Sainte Catherine Airport adds to the existing three routes to Corsica (Ajaccio, Bastia and Figari).

Starting from 16 May 2022, Volotea will operate the Lille - Palma de Mallorca route once a week (Mondays). The company will offer 6,552 seats on this new connection from Lille Airport to Palma de Mallorca Airport, which is its biggest destination in Spain.

Starting from 27 May 2022, Volotea will operate the Lille - Palermo route once a week (Fridays). This is the airline’s second route to Italy from Lille and will offer 7,700 seats.

Starting from 8 May 2022, Volotea will operate the Lille - Split route once a week (Sundays). This is the airline’s first route to Croatia from Lille and will offer 7,300 seats.

Starting from 17 May 2022, Volotea will operate the Lille - Varna route once a week (Tuesdays). The company will offer 6,552 seats on this new connection from Lille to Varna Airport, which is its biggest destination in Bulgaria.

“We are delighted to announce the launch of our base at Lille airport, which will become our seventh base in France on 1 April 2022, as well as the launch of routes to these six new very popular destinations. As a result of opening this base, we will directly create 30 jobs and will indirectly create 25 jobs at the airport, not to mention the many other expected jobs for handling the additional business activity created as a result of this additional traffic. Volotea aims to constantly offer Hauts-de-France residents more new opportunities to travel and to explore France and Europe with our attractively priced flights. The opening of this new base in Lille exemplifies our ambition for strong and continuous growth,” said Carlos Muñoz, the founder and CEO of Volotea.

Volotea is forecasting record growth in Europe for 2022 and France will account for approximately 50% of the company’s operations with a forecast of over 5 million seats. The airline, which is preparing to mark ten years of operations in France, intends to play a significant role in the economic and social development of the regions where it operates, by indirectly creating more than 150 new local jobs and a total of more than 600 Volotea employees in France in 2022.

You can buy tickets in France on all the usual distribution channels and on the Volotea website:www.volotea.com.