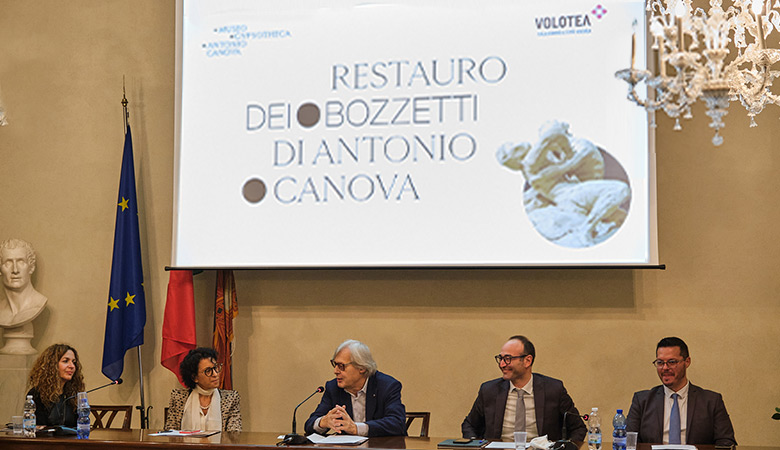 THE ANTONIO CANOVA GYPSOTHECA MUSEUM RESTORATION WORKS HAVE STARTED. ENTIRELY FINANCED BY THE AIRLINE COMPANY, VOLOTEA IN ORDER TO SUPPORT THE TERRITORY’S ART AND CULTURE

After winning the #Volotea4Veneto initiative, Possagno’s museum
was awarded with a prize of Euro 90k raffled off by the low-cost airline company.

34 terracotta sketches will be restored and 3 plaster models damaged during World War I will be secured.

Possagno, November 22, 2021 - The restoration works of the Antonio Canova Gypsotheca Museum in Possagno are under way, thanks to the contribution of Euro 90k allocated by Volotea, the low-cost airline company that connects medium-sized cities to European capitals. Thanks to the important contribution of the carrier, numerous works kept inside the museum will return to their original splendor.

Last May, with 14,222 votes, the Museum won the #Volotea4Veneto contest - an initiative born from the collaboration between the low-cost airline company based in Venice and Verona, the SAVE Group and the Veneto Region, beating the competition of 3 other projects promoted by other cultural institutions. An extraordinary result that, today, allows Gypsotheca to start the restoration works of 34 terracotta sketches and secure 3 plaster models that were damaged during World War I.

“The beginning of the restoration works of the Antonio Canova Gypsotheca Museum fills us with pride and conveys a sign of great optimism. With the #Volotea4Veneto initiative, we wanted to further consolidate our bond with the territory by supporting, in collaboration with the local authorities and the SAVE Group, the promotion of local art and culture," stated Valeria Rebasti, Volotea's Country Manager Italy & Southeastern Europe. "We are very confident and believe that the revival of tourism also involves the enhancement of cultural realities, such as the Canova Museum, which attracts thousands of visitors every year." 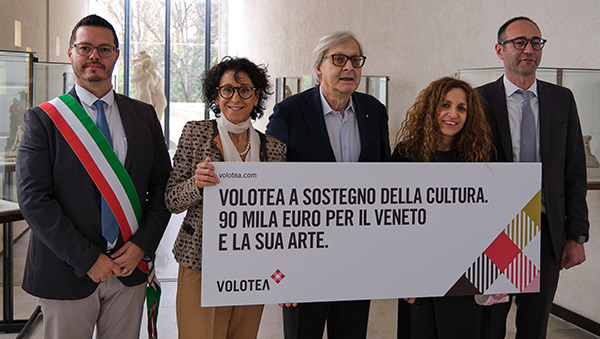 "The opportunity offered by Volotea provides us with the possibility of working on the corpus (or set) of the Canovian plaster casts with an important conservation intervention preceded by in-depth scientific research carried out in collaboration with the University of Bologna and the University of Padua," declared Moira Mascotto, Director of the Museum. "This analysis will allow us to obtain fundamental diagnostic results and to broaden our knowledge of these precious works and on the methods followed by Canova to create them. Restoration, diagnostic analysis and fact-finding research will be carried out at the Antonio Canova Gypsotheca Museum in Possagno; and while the restoration work is underway, there will be times when the public will be able to participate!”

“Putting words into action. Only a few months have passed since the winner of the #Volotea4Veneto contest was announced and at the Antonio Canova Gypsotheca Museum everything is ready for the start of the restoration works on an important piece of the sculptor's artistic heritage, one of the greatest figures of neoclassical art," declared Federico Caner, Council Member for Tourism, Agriculture and European Funds of the Veneto Region. "An initiative that shows commitment and whereby the synergy with Volotea was established. Together we also share the belief that to do business in a region that thrives on tourism it is necessary to safeguard the assets that enrich it. This can only be done with investments that go beyond immediate profit, and that guarantee the consolidation of that capital of priceless value with all the historical and cultural treasures. A task that the airline company, Volotea, with awareness and foresight, wanted to take on. Through the safe-guarding and redevelopment of the sites, works and artistic assets that Veneto proudly makes available to the national and international community, it also spreads a message of strong promotional value: our territory, as already demonstrated in recent months, is ready to welcome you again in all of its beauty."

"The #Volotea4Veneto project that we helped build together with the airline company and the Veneto Region defined itself as a participation model of an enlarged community, which proudly actively participated in the tender for the assignment of the contribution allocated by Volotea, indicating its preferences via social platforms," said Camillo Bozzolo, Aviation Marketing Manager of the SAVE Group. "The initiative was also a vehicle for getting acquainted with the cultural and artistic scenarios of our region which were in this manner presented to a wide audience. An exposure with which the Antonio Canova Gypsotheca Museum will continue to benefit beyond national borders, thanks to the spotlights that Volotea placed on the restoration project and on the entire collection."