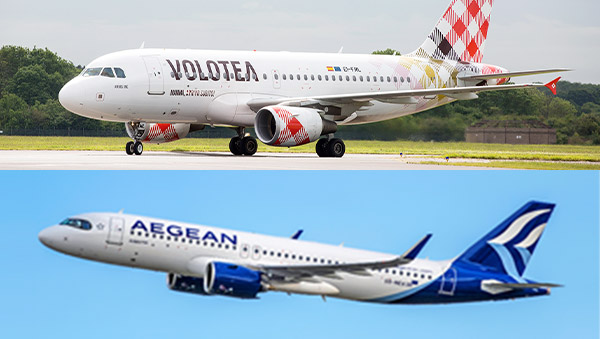 Volotea and AEGEAN Airlines unveiled today a new partnership to commercialize codeshare flights with a total of 100 routes in Italy, France, Spain and Greece.
The collaboration will allow customers of each company to benefit from an expanded destination offer.

Volotea and AEGEAN Airlines have signed a bilateral agreement to commercialize 100 codeshare routes on existing international routes in Italy, France, Spain and Greece and thus allowing customers of each company to benefit from an expanded destinations network. Sales have already started and travelers of both airlines will be able to purchase their tickets at either companies’ websites and other direct or indirect channels. The product offered will include checked‑in baggage.

“We are extremely happy to launch this partnership with AEGEAN, a very respected European independent airline that we share a lot of values with, in terms of high operational integrity, customer experience and price competitiveness. We selected routes that we believe our clients will be very interested in, and have been able to put together a very important number of destinations, which will cater for the increased offer of this summer. This agreement will offer both Volotea and AEGEAN a considerable growth opportunity since all the routes selected have no overlap.” said Carlos Muñoz, Founder and CEO of Volotea

“As leisure travel gradually returns, we are pleased to initiate this new cooperation with Volotea. The codeshare agreement will provide both our passengers significant additional number of direct flight options between the Greek islands and mainland and Italy, France and Spain both through our website and travel agents. We remain firmly committed to health-safe travel, to constantly improving our service offering and to keep accelerating our network and options for our customers by collaborating with reliable and fast-growing partners” said Dimitris Gerogiannis, CEO of AEGEAN.

ΑEGEAN and its subsidiary Olympic Air carried 15 million passengers in 2019.

AEGEAN has been honored, for the ninth consecutive year and 10th time in the last 11 years, with the Skytrax World Airline award, as the best European regional airline and has been also awarded as "Best cabin crew in Southern Europe in 2018”.