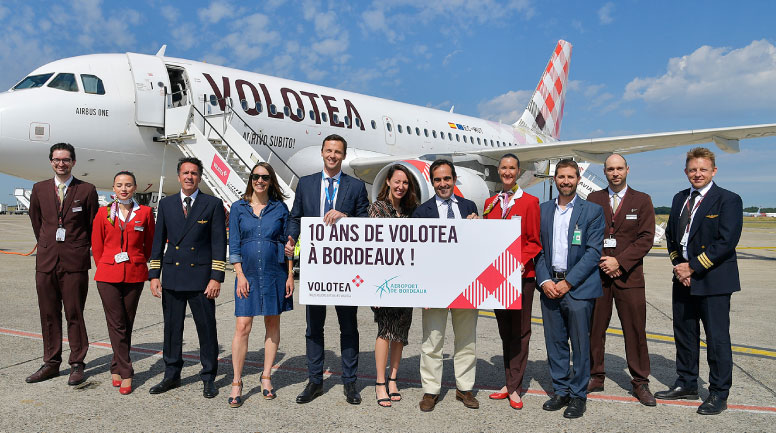 The airline has carried over 3.5 million passengers to and from Bordeaux-Mérignac Airport since 2012.

Volotea is the third biggest airline in terms of destinations at Bordeaux, offering 22 routes.

Bordeaux, 1 June, 2022 - Volotea is today celebrating its 10th anniversary at Bordeaux airport, having carried over 3.5 million passengers. This is an opportunity for the company to reaffirm its commitment to the airport, the city and the local economy. To mark the occasion, the Volotea team presented a new route to Nice to the local press

Over the last 10 years, Volotea has transported more than 3.5 million passengers to and from Bordeaux and has always been a consistent and cohesive part of the growth of the existing network in the city. Volotea now flies to a total of 22 destinations in six countries from Bordeaux, 14 more routes than in 2012, when the company started its operations in the city. This year, Volotea has increased its seat capacity in Bordeaux by 75% compared to last year. The company is currently employing 70 people in Bordeaux and has contributed to the creation of over 50 indirect jobs.

Volotea operates a total of seven exclusive routes from Bordeaux (Cagliari, Corfu, Dubrovnik, Florence, Santorini, Split and Strasbourg) and today announced a new domestic route with the opening of a direct connection to Nice. This new route is in addition to the two new routes already announced this year, which have been operational since the end of May: Athens and Florence.

Volotea has operated the Bordeaux - Florence route twice a week (Mondays and Fridays) since 27 May 2022.

This new route has been operating twice a week (Tuesdays and Saturdays) since 28 May.

This new route will operate twice a week (Tuesdays and Saturdays) starting 17 December.

Tickets are available for sale in France through all distribution channels and on the Volotea website: www.volotea.com.

Volotea is undertaking a major expansion in Europe in 2022 and France will now represent 50% of the company's activity, with a forecast of over 5 million seats and a total of 192 routes in France, including 60 domestic routes. The airline, which is celebrating its 10th anniversary this year, intends to play a major role in the economic and social growth of the French regions where it operates with the creation of more than 150 new indirect local jobs and a total of more than 600 Volotea employees in France in 2022. In addition to Nantes, Bordeaux, Toulouse, Strasbourg, Marseille, Lille and Lyon, the airline will open its eighth base in Lourdes in early July.

"We are very proud to be celebrating our 10th anniversary at our Bordeaux base today. We now offer 22 destinations from the airport and have carried more than 3.5 million passengers! This success paves the way for us to further expand our operations, providing more seats at attractive prices to more destinations in France and Europe, as illustrated by the launch of three new routes to Athens, Florence and Nice this year. Our base in Bordeaux has a positive economic and social impact on the region and provides nearly 70 direct jobs and 50 indirect jobs, confirming the key role that Bordeaux Airport plays in the economic growth of the region," said Carlos Muñoz, Founder and CEO of Volotea.

“Our celebration of the 10th anniversary of Volotea's air base is indicative of the company's success in Bordeaux. Volotea is highly committed to offering a quality travel experience and, with its operations growing to include three new routes this year, is a key player in the travel industry for all New Aquitaine residents," states Simon Dreschel, Chairman of the Bordeaux Airport Board of Directors. 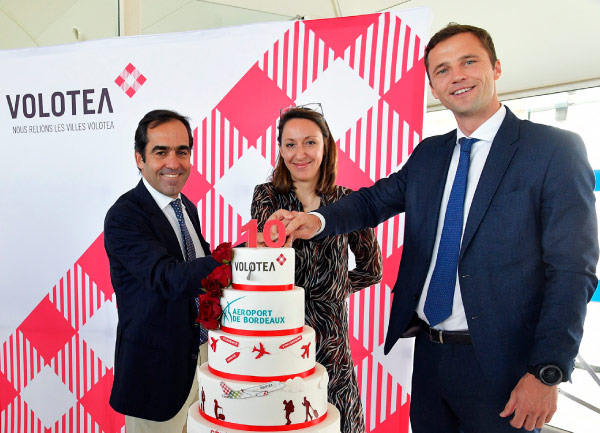