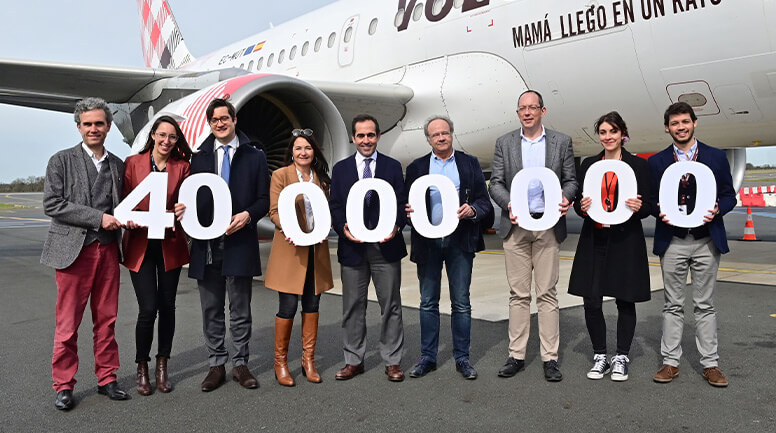 The airline is giving away a school trip as a prize for one Nantes secondary school class.

Volotea has deep roots in the Nantes region and in the entire Loire-Atlantique Département. Therefore, it is launching an initiative that will benefit the Nantes community.

Press release, 9 March 2022 - Volotea, the airline of Europe’s regional capitals, is celebrating transporting 40 million passengers in Nantes, its main base in France, by launching a competition for secondary schools in Nantes’ priority education networks.

In order to celebrate transporting 40 million passengers, Volotea, which has its main French operating base in Nantes, has decided to launch a competition between five priority education network schools in Loire-Atlantique, with the winners receiving an end-of-year school trip. Volotea has set itself the mission of connecting cities that would not otherwise be linked, so that everyone can discover new destinations. This initiative aimed at secondary school pupils is a perfect example of the company’s ethos.

For their entries in the “My Class in Europe” competition, classes at these schools must submit a short and original video in which they talk about why they want to travel, outline their travel plans and give their reasons for their selecting their chosen European city. Pupils will have 19 days, from 1 March to 19 March, to make their video, which will then be sent to a jury made up of local representatives. The prize ceremony will be held on 28 March in Nantes.

Carlos Muñoz, CEO and founder of Volotea: “Our strategy of connecting medium-sized cities has been successful, as it has given everyone the chance to travel and discover new destinations more easily, both in France and in Europe, without having to travel via capital cities. As a company with a strong link to the city, we wanted to give back to all members of the community. We have chosen to celebrate transporting 40 million passengers in Nantes, which is now our main operating base in France.  We are extremely grateful for the trust and confidence that the people of Nantes have shown us over the past 10 years. In particular, I would like to thank the Loire-Atlantique Département and the local education authorities in Nantes and Nantes Métropole for their support in this positive initiative, which brings together a significant section of Nantes’ population.”

Nantes has played a significant role in Volotea’s history. Since opening this operating base, the airline has transported more than 6 million passengers and this year expects to offer more than 1.7 million seats, which is an 89% increase from 2021. Volotea is fully committed to Nantes and the Nantes region.  The company is delighted to celebrate its 40 millionth passenger by launching a project targeted at the educational community, and also aimed at families, parents, friends and society as a whole.