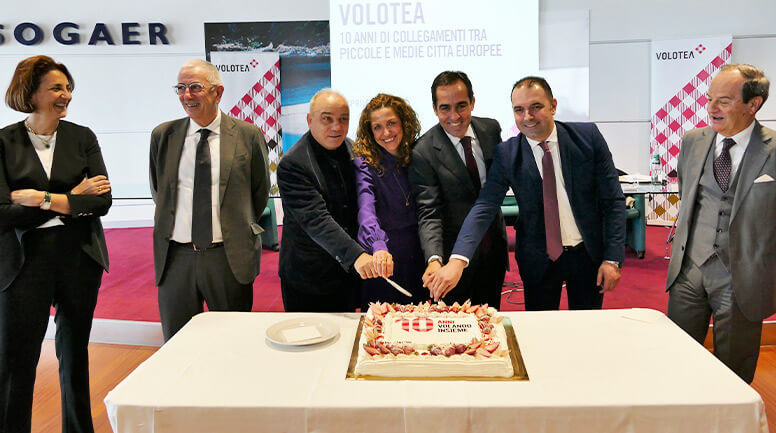 VOLOTEA CELEBRATES ITS TENTH ANNIVERSARY IN SARDINIA WHERE, SINCE THE START OF ITS ACTIVITIES, IT HAS TRANSPORTED OVER 4.2 MILLION PASSENGERS

Operating from three Sardinian airports since 2012, the airline has had a strong focus on the island, inaugurating its base in Cagliari in 2019
followed by the one in Olbia in 2021

Thanks to its investments at local level, the carrier estimates that it has created
around 200 jobs in support of the Region's economy

Volotea, the first low-cost airline to be awarded management of flights subject to aerial territorial continuity requirements, confirms that it will continue to operate links from Cagliari and Olbia to Milan Linate Airport
and Rome Fiumicino Airport even after 14 May: tickets will be on sale from 6 and 7 April

Cagliari, 6 April 2022 - Volotea, the low-cost airline that links European medium-sized cities and capitals, celebrated its 10th birthday in Italy, reinforcing the special link established with Sardinia. The company, which has had a presence at local level since 2012, is reaffirming the island as an area of strategic interest and recently reinforced its offering devoted to links to and from Sardinian airports, thereby contributing significantly to improving the Region's connectivity. Lastly, Volotea has confirmed that it will continue to fly from Cagliari and Olbia to Milan Linate Airport and Rome Fiumicino Airport even after 14 May: tickets will be on sale from 6 and 7 April.

Since its start-up, Volotea has transported over 4.2 million passengers at regional level, thanks to numerous connections established at Sardinian airports: over the summer season, it will be possible to reach 20 destinations from Cagliari, 20 from Olbia and five from Alghero, with an overall sales offering of 2.9 million seats and 16,000 flights. This is a clear signal that the company wishes to continue investing, thereby promoting the tourism potential of Sardinian destinations.

The presence of Volotea in Sardinia, in addition to maximising passenger traffic, has also contributed to strengthening Sardinia's economic fabric: thanks, in fact, to the inauguration of its bases in Cagliari (2019), Olbia and Alghero (2021), the carrier estimates that it has created a total of approximately 200 job opportunities, including for pilots and cabin crew. And let's not forget the economic spin-offs created by flows of tourists in transit.

A major component of Volotea's growth in Sardinia has come from the management of flights subject to aerial territorial continuity requirements: as the first low-cost airline to be awarded the tender, since last October Volotea has been guaranteeing convenient and punctual connections between Sardinian airports and Rome Fiumicino Airport and Milan Linate Airport. In March, for example, the carrier achieved excellent performance levels, with an overall On-Time Performance rate (OTP 15) of 97.3% of its flights subject to the aerial territorial continuity regime: this means that nine out of ten aircraft were operated with optimal punctuality. The carrier's commitment is not limited to the expiry date of the current aerial territorial continuity period: Volotea has in fact confirmed that it will operate connections from Cagliari and Olbia to Rome Fiumicino Airport and Milan Linate Airport even after 14 May. The flights, which will be operated for 12 months without any financial compensation, will enable the island’s connectivity to be strengthened, thereby facilitating the movements of Sardinian passengers. From Cagliari it is planned to have three to five daily flights to Rome Fiumicino Airport, while one to two daily flights to Milan Linate Airport are scheduled. From Olbia, on the other hand, it will be possible to fly to Rome Fiumicino Airport two to three times daily and two daily flights will be operated to Milan Linate Airport.

For the next 12 months, from 15 May, Volotea will be the only player to guarantee connections between these two Sardinian airports and Rome Fiumicino Airport and Milan Linate Airport. As set out in the provisions of the territorial continuity notice issued by the Region of Sardinia, the low-cost airline and ITA Airways will harness synergies to share management of these routes without any financial compensation. Over the last few days, these two airlines’ teams have worked together to draw up scheduling that is able to ensure convenient flights that are on time and are suitable for all passengers travelling to and from Sardinia and mainland Italy. Both carriers’ joint commitment is to support and strengthen the island's connectivity in a way that is advantageous to all passengers.

“Today's meeting provides an opportunity to celebrate the consolidated relations linking Volotea and Sardinia, which began ten years ago. In Sardinia, we found reliable strategic partners who have accompanied us on our growth path, and we would like to thank the management of the Sardinian airports and all the local authorities for having faith in our project”, declared Carlos Muñoz, the Chairman and Founder of Volotea. “We are continuing with our ongoing investments at local regional level, which constitutes one of the most important markets internationally: we have contributed significantly to supporting the Region of Sardinia and its economy, including by creating many employment opportunities. Showing our ongoing commitment to supporting the Region, we are proudly announcing that we will continue to fly from Cagliari and Olbia to Milan Linate Airport and Rome Fiumicino Airport: from today until tomorrow, it will be possible to purchase tickets to fly even after the expiry of the current territorial continuity notice. These flights will be operated on for the next 12 months without any financial compensation. We hope that the strong ties created during these first ten years can be consolidated further and we expect to be able to announce new developments in Sardinia in the near future.”

“We are pleased to be participating in the celebrations of Volotea's tenth anniversary in Sardinia: these celebrations are the sign of a Region that is attractive and rich in potential”, declared Giorgio Todde, the Sardinian Regional Transport Minister. “Furthermore, we are happy that Volotea has decided to operate flights for 12 months without compensation, thereby supporting the local economic fabric.”

“Today marks a major milestone and we would like to express the Region of Sardinia's gratitude to Volotea, a company that has brought prestige to our Region,” declared Gianni Chessa, the Sardinian Regional Transport Minister. “Volotea is guaranteeing a major service in terms of transport continuity and enables us to sustain the Region's economic growth through the connections operated. Even in the most difficult times, Volotea has been able to adapt itself to the requirements of Sardinian passenger flights within very short timeframes and offer numerous add-on services. On behalf of Sardinia, we would like to thank Volotea for the service offered in support of the island's connectivity.”

During summer 2022, Volotea will offer a wide range of summer destinations at competitive prices, providing routes that are able to fulfil Sardinians’ requirements. From Cagliari, there are connections to 20 destinations, 20 from Olbia, and five from Alghero.

Details of all the Volotea routes are available on the website www.volotea.com and from travel agencies.