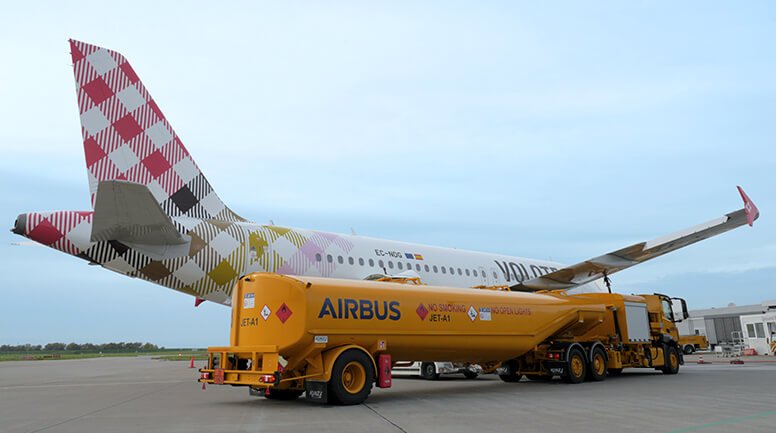 Since mid-September, Volotea has been operating Airbus' internal shuttle service           with 34% of SAF.

This year the airline started introducing SAF and is supporting manufacturers in the industry to enable its development and generalized distribution as soon as possible.

Since 2012, Volotea has carried out more than 50 sustainability projects, thus reducing its carbon footprint per passenger and per kilometer by more than 40%.

Barcelona, November the 2nd, 2022: Volotea, the airline of the small and medium sized cities in Europe, has been operating Airbus' internal shuttle service since mid-September with 34% SAF (mix charged in Hamburg for the round trip). Volotea was chosen in 2019 by the European manufacturer to operate the shuttle between its sites in Toulouse and Hamburg, from Monday to Friday. In line with its commitment to support the use and accessibility of SAF, Volotea is now introducing, in collaboration with Airbus, a high percentage of sustainable fuels to its daily operations from Hamburg.

"We are extremely proud to be taking increasing steps towards the decarbonisation of the aviation industry with our partner Airbus. Our collaboration on the Airbus shuttle service is evolving in the best direction, as illustrated by the relentless commitment of our two companies to sustainable aviation," said Carlos Muñoz, Founder and CEO of Volotea

Since its foundation in 2012, Volotea has carried out more than 50 sustainability projects, thanks to which it has reduced its carbon footprint per passenger and per kilometer by more than 40%. Among other initiatives Volotea participates in the development of alternative technologies capable of supporting a zero-emission future for the aviation sector. In addition, in 2021 Volotea started offsetting 5% of its total carbon emissions, aiming to reach 25% reduction of its carbon footprint in 2025. This year, the airline has started to introduce sustainable fuels to power its aircraft and is working with manufacturing and industrial players to make these fuels, which are currently difficult to access, available on a large scale in the shortest possible time. In support of the transition towards sustainability, Volotea is also involved in an ambitious project aimed at developing the first 100% small commercial electric aircraft, which could be certified for flight by 2024.

Volotea became a 100% Airbus carrier in 2021, replacing a significant part of its fleet with A320 Family aircraft. Thanks to the use of aircraft with a greater capacity and longer flight range, the company was able to increase its efficiency. Volotea connects over one hundred small and medium-sized cities in Europe, operating direct flights which allow passengers to reduce flight times and thus fuel consumption footprint. With a goal of increasing efficiency, over 90% of the flights operated by Volotea connect cities that cannot be connected to each other by train or car in less than six hours, while the average occupancy rate on board the carrier's aircraft is between 90% and 95%. Finally, Volotea plays a particularly significant role in guaranteeing the connectivity of European islands with the mainland; 65% of its flights provide connections to and from islands such as Sardinia, Sicily, Corsica, Mallorca, among many others.

Volotea was founded in 2011 by Carlos Munoz and Lázaro Ros, previously founders of Vueling, and is one of the fastest-growing independent airlines in Europe in the last decade, increasing year-on-year its fleet, routes served, and seats offered. In 2022 it reached 45 million passengers carried in Europe.

Venice, and Verona. Volotea serves more than 100 cities in 16 countries, with novelties in 2022 such as Denmark, which will begin operating in May this year from Italy, and Algeria, which began last December with flights from France.

The airline operates a fleet of 41 aircraft in 2022, up from 36 in summer 2019. In terms of volume, Volotea has increased its seat capacity by nearly 39% compared to 2019, highlighting the strong latent demand in Europe's mid-sized city markets. Likewise, this year the airline offered a total of 11 million seats, which represents an increase of almost 40% compared to 2019, the year in which the airline put 8 million tickets on sale and increases its staff in all its markets. In June 2022, Volotea had more than 1,600 employees in Europe. Volotea has won, for the second year in a row, the award as ‘Europe’s Leading Low-Fares Airline’ at the 2022 World Travel Awards, the most prestigious awards recognizing excellence in the transportation and tourism industry worldwide.