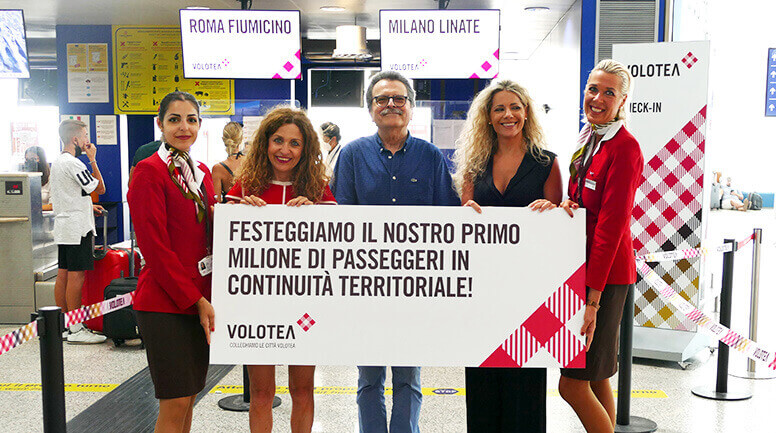 Carlo Avataneo, 70, a pharmacist from Cagliari, was greeted with a surprise celebration at the airport in the Sardinian capital. He received a very special prize: €1,000 to be used to buy Volotea flights to and from Sardinia.

The low-cost carrier's commitment to supporting connectivity in the area continues; in addition to routes to numerous domestic and international destinations departing from Sardinian airports, the carrier operates flights from Cagliari and Olbia to Milan Linate and Rome Fiumicino, without any economic compensation.

Cagliari, 21 June 2022 - Volotea, the low-cost airline that connects medium-sized cities and European capitals, is flying higher and higher above the skies of Sardinia. The carrier celebrated carrying its first million passengers under the territorial continuity scheme on the island by holding a special ceremony at the check-in area in Cagliari airport. Surprising Carlo Avataneo, a Cagliari pharmacist and the lucky first millionth passenger, were Valeria Rebasti, Volotea's Country Manager Italy & Southeastern Europe, and Sogaer's top management. The company had a very special prize for Mr Avataneo: €1,000 to be used to purchase Volotea flights to and from Sardinia.

This important milestone is the outcome of the numerous investments that Volotea has made in recent years to support the territory and the needs of its inhabitants. The low-cost carrier has been a key player locally since it started operating on the island, which it has always considered an area of strategic interest. Volotea recently increased the number of routes it operates to and from Sardinian airports, contributing significantly to the greater connectivity of the region.

Being granted the tender to operate territorial continuity flights was an important stage in Volotea's growth in Sardinia. As the first low-cost carrier to be awarded the tender, Volotea guaranteed punctual and convenient connections between Sardinian airports and Rome Fiumicino and Milan Linate from October 2021 to May 2022. The carrier's commitment did not end with the expiry of the initial territorial continuity period and Volotea has confirmed connections from Cagliari and Olbia to Rome Fiumicino and Milan Linate after 14 May. Volotea will be operating flights without any economic compensation until May 2023, further strengthening the link between the region of Sardinia and Volotea and confirming the airline’s commitment to maintaining the connectivity of the island and facilitating travel for Sardinian passengers.

"A perfect synergy has been established between Volotea and Sardinia over the years and, after just a few months, we are delighted to be celebrating our millionth passenger under the territorial continuity scheme," commented Valeria Rebasti, Volotea’s Country Manager Italy & Southeastern Europe. "Today's milestone, in addition to rewarding our investments in the territory, confirms how successful our choice to participate in the tender for the assignment of territorial continuity has turned out to be. We have found reliable strategic partners on the island who have accompanied us on our growth path, and we thank the management of the Sardinian airports and all the local authorities for believing in our project. We have never stopped investing in the local area, which represents one of our most important markets at the international level; we have contributed significantly to supporting the region of Sardinia and its economy, including through the creation of numerous employment opportunities."

Flights to and from Sardinia are not the only connections Volotea is operating under territorial continuity arrangements; since the beginning of June, the company has also been operating the Lourdes-Paris Orly continuity route.