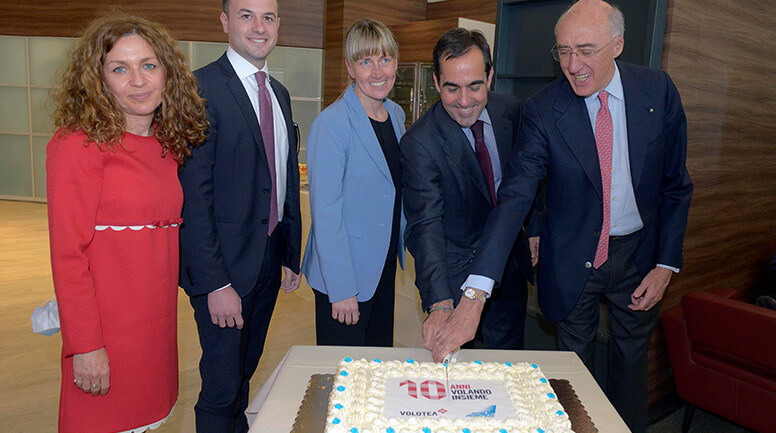 VOLOTEA CELEBRATES ITS TENTH ANNIVERSARY IN VENICE UNDER THE BANNER OF SUSTAINABILITY: THE LOW-COST AIRLINE HAS STARTED FLYING IN ITALY USING SAF (SUSTAINABLE AVIATION FUEL). IN ADDITION, THE AIRLINE ANNOUNCES TWO NEW AUTUMN CONNECTIONS FROM MARCO POLO TO LILLE AND NICE.

At Marco Polo Airport, where Volotea inaugurated its first operations base
in Europe and where the carrier's new A320 aircraft are hosted,
the company has transported over 5.6 million passengers since its first flight

For summer 2022, Volotea will be operating 30 routes from Venice,
including ten domestic ones and 20 international ones, and the company is relaunching and aiming to offer a range of 36 connections by the end of the year

Venice, 5 April 2022 - Volotea, the low-cost airline providing linkage between medium-sized cities and European capitals, is celebrating its first ten years of operations in Venice. Since 2012, the year its operations started, Volotea has established a special bond with Venice and the whole Veneto region: Marco Polo Airport was in fact the first base inaugurated by the carrier in Europe and Venice was also where the carrier decided to base its new A320 aircraft in 2021. Furthermore, thanks to a joint initiative by Volotea, SAVE and Eni, the company's first Italian flights have taken off supplied with Jet fuel & Eni SAF, a mixed fuel with a renewable raw materials component produced by the refinery at Taranto. Lastly, to celebrate its tenth anniversary, Volotea has come up with a special offer for its passengers who can book flights at prices from 5 Euros to many destinations on the company's network.

Since the start of its operations, Volotea has transported 5.6 million passengers to and from Venice, and around 10 million at regional level, if you also take those transported by the company from Catullo Airport into consideration. Thirty destinations can be reached from Marco Polo Airport flying on the carrier's aircraft, 13 of which are exclusive destinations, with the carrier anticipating offering a range of 36 routes by the end of the year. Following some difficult years in the tourism sector, Volotea has great hopes for the future: the company's estimate is that, in 2022, it will transport nearly 700,000 passengers to and from Marco Polo Airport, with a total of over 4,300 flights and an estimated offer of over 760,000 seats.

Proving Venice's central location, in 2021 its airport became the first airport in Europe to host the carrier's new A320 aircraft, inaugurating its transition (which was firmed up last year) to a full-Airbus fleet that is more environmentally friendly and efficient. At global level, Volotea recently announced the upgrading of its fleet by adding six new Airbus A320s, which will enable the airline to improve the costs structure and further reduce its own environmental impact. This summer, Volotea will have a total of 41 to 45 aircraft in its fleet.

With its closeness to the Veneto Region and its cities, in 2021 Volotea launched #Volotea4Veneto to promote and protect beautiful local artworks. The initiative, which is the outcome of collaboration between the low-cost airline, SAVE Group and the Veneto Region, was closed with the victory of the Antonio Canova di Possagno Plaster Casts Gallery, which was awarded 90,000 Euros by the airline in support of local art and culture.

Since it was founded, Volotea has carried out numerous initiatives focusing on sustainability, thanks to which it has reduced its carbon footprint per passenger-kilometre by over 41%. With its ever-increasing focus on sustainability, Volotea has decided, for the first time in Italy and in Venice, to use a mixed fuel in its planes’ fuel tanks, featuring a renewable raw material component. In 2022, the company estimates it will be able to use mixed fuel with SAF to supply around 45% of its scheduled flights. It should also not be forgotten that, in support of a transition to being more environmentally friendly, Volotea is also working on an ambitious project aimed at developing the first fully electric-powered aircraft, which will be flight-certified by 2024.

“Today's meeting is an opportunity to celebrate the consolidated links between Volotea, SAVE and the Veneto Region: a relationship that started ten years ago, right here at Marco Polo Airport and which, thanks to support from SAVE, an energetic, reliable travel company, we have also successfully repeated this effort at Verona Airport where, in 2015, we inaugurated our second base in the Veneto Region", declared Carlos Muñoz, the Chairman and Founder of Volotea.  “We are continuing with our ongoing investments at local regional level, which constitutes one of the most important markets internationally: it is not merely by chance that we decided to initiate our first flights running on sustainable fuel in Venice. Year after year, with our ongoing investments, we feel that we have made a significant contribution to sustaining the Region and its economy, both through the creation of job opportunities and initiatives aimed at reinvigorating the local cultural sector and its high tourism potential. We hope that the strong ties created during these first ten years can be consolidated further and we expect to be able to announce new developments at local level in the near future.”

During summer 2022, Volotea will offer a broad range of summer destinations at competitive prices, reaffirming all the routes departing from Venice to Greece, including those to Kalamata, a new link announced in the past but not put into operation because of the pandemic. In total, there are 30 destinations that can be reached flying with Volotea from Venice; ten in Italy (Alghero, Bari, Brindisi, Cagliari, Catania, Lampedusa, Naples, Olbia, Palermo and Pantelleria) and 20 abroad (Bilbao, Malaga and Zaragoza in Spain; Athens, Kefalonia, Crete, Kalamata, Karpathos, Mykonos, Preveza, Samos, Santorini, Skiathos and Zakynthos in Greece; Bordeaux, Lyon, Marseille and Nantes in France; Split in Croatia, and Luxembourg), and the carrier is considering offering a total of 36 routes by the end of the year.