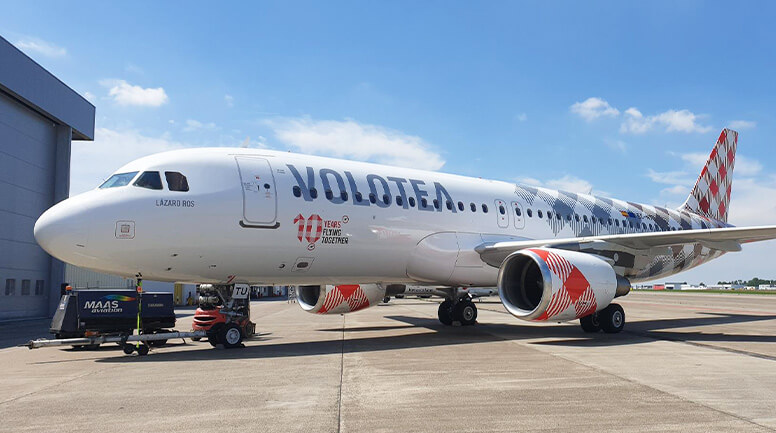 VOLOTEA REVEALS ITS 10TH ANNIVERSARY AIRCRAFT WITH A UNIQUE LIVERY DESIGN TO CELEBRATE THE NEXT DECADE OF ITS OPERATIONS.

The new aircraft has been named ‘Lázaro Ros’, after one of the company's two co-founders. And the aircraft’s metallic colour scheme represents the future of flying and all the opportunities it offers.

Barcelona, 20th June 2022 – Volotea, the airline of Europe's medium-sized cities, is today presenting its 10th anniversary commemorative aircraft named Lázaro Ros, after one of the company's founders. The new livery both commemorates this milestone and symbolises Volotea’s next ten years. The aircraft’s metallic colour scheme represents the future of flying and all the opportunities it offers.

Saffron Brand Consultants (the firm that created the Volotea brand and recently was involved in the rebranding of Facebook Company as Meta) were asked to reinterpret Volotea’s livery and to design this commemorative A320 aircraft, giving it a futuristic touch but without losing the airline’s iconic Mediterranean identity. The metallic colour scheme used in the design aims to reflect the next ten years of Volotea. The colour gradient was achieved - passing from Volotea’s corporate red to metallic silver - using particles of mica for the metallic effect without interfering with aircraft systems.

"We really excited to be unveiling our new livery today. A design and engineering team at Volotea has been working for months to bring this aircraft to life. Everyone at Volotea is looking forward to see it flying!” commented Lazaro Ros, General Director and co-founder of Volotea.

"Volotea is a young and courageous airline with strong values. Planning this commemorative aircraft and overhauling the already disruptive and distinctive livery has been extremely exciting and lots of fun. We took this opportunity to ask ourselves what the livery would look like for the next ten years. We drew inspiration from the desire to continue along the path set ten years ago with great optimism, and to try to anticipate the next ten years of Volotea’s trajectory. There are major challenges on the horizon for the airline: their people, their passengers, the environment, so we wanted to design a lighter and even more optimistic livery than the previous one. Happy anniversary Volotea!" said Roberto Verona, Creative Director of Saffron.

Last summer, Volotea completed the transition to a 100% Airbus fleet, which has allowed the company to significantly improve its competitiveness and efficiency thanks to a single pilot licence, lower maintenance costs as well as simplified programming, monitoring and auditing.

Volotea was founded in 2011 by Carlos Munoz and Lázaro Ros, previously founders of Vueling, is one of the fastest-growing independent airlines in Europe, increasing year-on-year its fleet, routes served, and seats offered. And this year it reached 40 million passengers carried in Europe.

Volotea is currently based in 18 medium-sized European capitals: Asturias, Athens, Bilbao, Bordeaux, Cagliari, Hamburg, Lille (opened in April), Lyon (opened in 2021), Lourdes (opening in July), Marseille, Nantes, Naples, Olbia, Palermo, Strasbourg, Toulouse, Venice, and Verona. Volotea serves more than 100 cities in 16 countries, with novelties in 2022 such as Denmark, which will begin operating in May this year from Italy, and Algeria, which began last December with flights from France.

The airline will operate a fleet of between 41 in 2022, up from 36 in summer 2019. In terms of volume, Volotea will increase its seat capacity by nearly 39% compared to 2019, highlighting the strong latent demand in Europe's mid-sized city markets. Likewise, this year the airline plans to offer a total of 11 million seats, which represents an increase of almost 40% compared to 2019, the year in which the airline put 8 million tickets on sale; and increase its staff in all its markets. In June 2021, Volotea had more than 1,400 employees and by 2022 the company expects to have more than 1,600 employees in Europe.

Volotea became a full Airbus carrier in 2021, by renewing part of its fleet with aircraft from the European manufacturer. The airline, which had planned to perform this fleet unification in 2023, has advanced its plans in order to improve its cost base over the next 2-3 years and increase its network offering, with aircraft that have a higher capacity and a longer flying range. Since 2012, Volotea has carried out more than 50 sustainability actions, thanks to which it has reduced its carbon footprint per passenger and kilometer by more than 41%. In 2021, the airline began to voluntarily offset 5 percent of its total CO2 emissions until it reaches 25 percent offset of its carbon footprint in 2025. This year, the company has introduced sustainable fuels in its aircrafts and will collaborate with manufacturers and industry so that these fuels (now difficult to access) can be developed and become widespread as soon as possible.