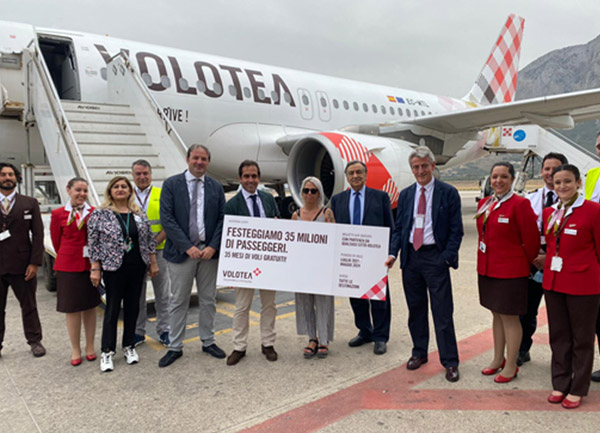 VOLOTEA CONTINUES TO GROW AND CELEBRATES ITS 35 MILLIONTH PASSENGER

The airline reaches this major milestone in 9 years after its first flight, making it the fastest-growing airline startup in Europe this decade

Volotea is leading the aviation sector's recovery this summer, and will offer 6.4 million of seats in the second half of the year, increasing its offer by 34% compared with 2019

Thanks to its unique business model focused in mid-sized cities, Volotea has created more than 288 new routes since it first launched

30 June 2021 – Volotea, the airline connecting mid-sized European cities, has now carried 35 million passengers internationally and has celebrated the event in Palermo, Italy. This major milestone has been achieved less than 10 years after the airline's first flight, and was celebrated in person by its co-founders Carlos Muñoz, CEO, and, Lázaro Ros,  Managing Director, together with Leoluca Orlando, Mayor of Palermo, as well as Giovanni Scalia and Francesco Randazzo, respectively Managing Director and President of GESAP (Palermo airport management company)..

The celebrations were also attended by Francesca di Benedetto from Castelvetrano, the 35 millionth passenger, who was awarded with a pass to fly for free during 35 months on board Volotea aircraft, being able to choose among 100 destinations within the airline’s network. Additionally, the carrier has decided to go big in this celebration, by also organizing an online activity that will reward 35 users with 1 month of free flights.

"We're delighted and proud that we can celebrate our 35 millionth passenger right here in Italy, a country that is very close to our hearts. In fact, it was right here, in 2012, that our first flight took off. Reaching 35 million passengers, in less than 10 years, and operating over 40 Airbus aircraft this summer is something that vindicates our strategy of offering connections between medium-sized destinations, that previously don't exist or are poorly served. On behalf of the entire company, I would like to thank our employees for their hard work, and the thousands of passengers who, each day, choose our aircraft for their holidays” said Carlos Muñoz, Volotea’s CEO and Co-Founder.

Volotea has seen some of the highest levels of growth of any airline following the COVID-19 crisis, launching 70 new routes since 2020 and redistributing almost 80% of its offer to domestic flights. The airline will put on sale a total of 6.4 million of seats between July and the end of the year, increasing the number of seats available by 34% compared with 2019. As it did during summer 2020, Volotea will continue to drive the aviation sector's recovery through its resilience, flexibility and a modern fleet that, currently, is composed of 20 Airbus A319s and 20 Airbus A320s. In a bid to strengthen its international network, Volotea recently launched two new operational bases: one in Olbia and one in Lyon.

Thanks to its unique business model, connecting Europe's medium-sized and capital cities, Volotea has created more than 288 new routes within its markets since it first launched, and has seen significant growth, having increased the number of seats available by 15% to 39% each year. The number of passengers carried is also growing annually by between 16% and 41%.