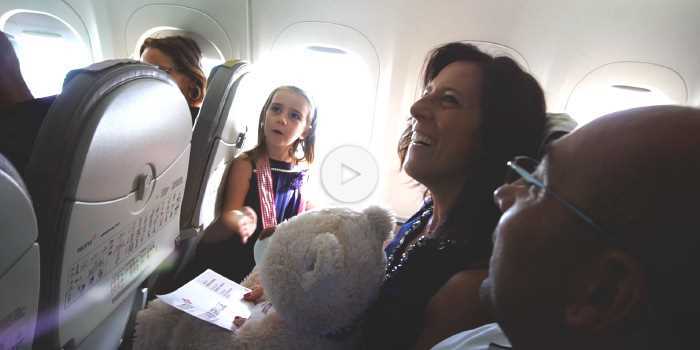 The young winner, Claudia Colasuonno, and her parents are the lucky Volotea passengers who will fly one year for free from Verona

Mimo walks around looking for the 9 millionth passenger at the Italian airport of Bari, Karol Wojtyla, holding an endless list of names to check. He boards on the Volotea flight to Verona and starts checking all the passengers with a stethoscope, trying to find the lucky passenger who give the special prize to. This is the beginning of the video released today by the airline.

“It has been a great event, a funny show specially designed for families” – commented Giovanna Andriola, mother of the lucky winner, during the celebration.

Claudia Colasuonno -who was born in 2012, the same year when Volotea started to operate- and her parents will be able to fly one year for free to all the Volotea destinations from Verona.

In order to celebrate the 9 millionth passengers, the airline has launched today a special promo offering tickets from 9 euros to fly in all the Volotea network (for bookings made until next Sunday).

The range of the A319 also allows the company to operate routes with a longer distance and, therefore, to penetrate new markets. While the Boeing 717 has a range of 2.500km, the Airbus A319 reaches 3.500km. In addition, the punctuality rates of the A319 are in constant progression: in August, more than 80% of the flights operated with the A319 arrived on time, and in September the figures are close to 90%. As a result, client recommendation levels are over 90%. In addition, Volotea is the fastest growing among large LCCs in Europe according to ASKs (Available seat kilometres), one of the main indicators for growth as used by the aviation industry.