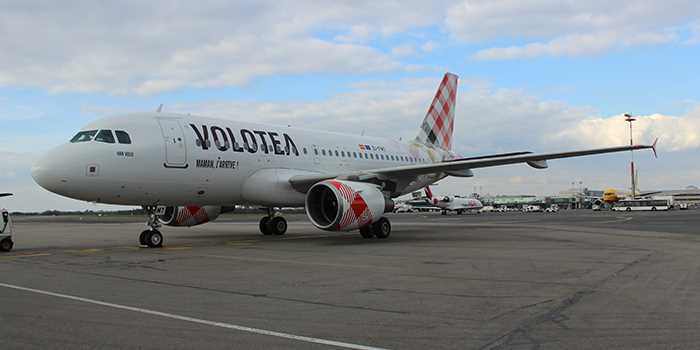 The Company will operate a fleet of 28 aircraft and expects to transport between 4,3 and 4,5 million passengers next year

More than 50,000 names received in the contest “Hello my plane is…” to baptize the new Airbus A319s

The Volotea Airbus A319 baptized as "Han Volo"

28 aircraft in 2017
Related to the fleet, Volotea will count on 28 aircraft next year. With the addition of 6 new Airbus A319s in 2017, the airline will have 10 Airbus A319s and 18 Boeing 717s. The company expects to become a 100% Airbus operator in the next few years. This strategic decision allows the company to increase its passenger capacity by 20%, from its current 125 seats to 150 seats on its new planes. Both models are recognized for their comfort and reliability, with Volotea offering reclining seats which are 5% wider than the average, with approximately 30 inches of separation between each row.

The range of the A319 also allows the company to operate routes with a longer distance and, therefore, to penetrate new markets. While the Boeing 717 has a range of 2.500km, the Airbus A319 reaches 3.500km. In addition, the punctuality rates of the A319 are in constant progression: in August, more than 80% of the flights operated with the A319 arrived on time, and in September the figures are close to 90%. As a result, client recommendation levels are over 90%.

With the arrival of the new A319s, Volotea has again organized the contest “Hello, my plane is…”, that has counted on a high level of participation, with more than 50.000 entries. The winning names will be shared next September 26th through the webpage and the newsletter.