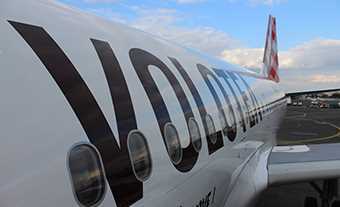 Volotea, ranks third among the most on-time low cost airlines in Europe in December with over 86% of flights on time, according to FlightStats.com
The airline has a client recommendation rate of 90%

January, 11st, 2017 – Volotea, the airline of mid and small‐sized European cities, is the fourth most punctual low cost airline in the world, according to the monthly report of the US independent airline data performance agency FlightStats for the month of December 2016. In Europe, Volotea is the third most punctual low cost airlines in the same month.

Volotea keeps on reaching heights. The company has been the fourth most punctual low cost airline in the world during the month of December 2016, when 2,100 flights were operated. Volotea’son-time arrival performance rate reached 86.08%, according to the monthly statistics published by the leading US-based independent airline consultant agency FlightStats. For the same period, the on-time arrival performance rate ranked third in Europe.

In 2016, Volotea has experienced a significant increase in its operations and in the number of carried passengers in comparison to the previous year. Volotea is the fastest growing large LCC in Europe in ASKs terms (Available seat kilometers). Volotea’s client recommendation rate stands at 90%.

“The punctuality rates of the company, fourth in the world and third in Europe at the end of 2016, show our aim to offer every day a better experience to our passengers always at very competitive rates, and the professionalism and good job of all the Volotea teams”, Carlos Muñoz, Founder and CEO of Volotea stated.

FlightStats, part of FlightGlobal, is the leading data service provider of real-time global flight data to companies and individuals focused on commercial aviation.

In its sixth year of operation, Volotea keeps on growing: the Company, which had two bases in 2012 (Venice and Nantes), will count on nine bases in 2017: Venice, Nantes, Bordeaux, Palermo, Strasbourg, Asturias, Verona, Toulouse and Genoa, that will be launched this year.

Volotea will count on 28 aircraft with the addition of 6 new Airbus A319s: the airline will have 10 Airbus A319s and 18 Boeing 717s. The company expects to become a 100% Airbus operator in the next few years. This strategic decision allows the company to increase its passenger capacity by 20%, from 125 seats to 150 seats on its new planes. Both models are recognized for their comfort and reliability, with Volotea offering reclining seats which are 5% wider than the average, with approximately 30 inches of separation between each row.

The range of the A319 also allows the company to operate routes with a longer distance and, therefore, to penetrate new markets. While the Boeing 717 has a range of 2,500km, the Airbus A319 reaches 3,500km. Thanks to its punctuality rates, client recommendation levels are now at 90%. In addition, Volotea is the fastest growing among large LCCs in Europe according to ASKs (Available Seat Kilometers), one of the main growth indicators used by the aviation industry.

The first four Airbus that joined the Company are based in Nantes, where one of the six new Airbuses A319s will also be placed. The other five will be based in Bordeaux and Toulouse. The first Airbus A319 of the 2017 line will be received in January, and the rest  will do so progressively during the first semester.

Volotea, the airline of mid and small-sized European cities, offers direct flights at very competitive prices. Its fleet is currently composed of 19 Boeing 717 (with a configuration of 125 seats) and 4 Airbus A319 (with 150 seats). Both models are recognized for their comfort and reliability, with Volotea offering reclining seats 5% wider than the average with approximately 30 inches of separation between each row. In 2017, the airline will add 6 new Airbus A319 to the fleet.

In 2017 Volotea will operate 240-250 routes among 79 medium and small-sized cities in 16 countries: France, Italy, Spain, Germany, Greece, Croatia, The Czech Republic, Israel, Albania, Moldavia, Portugal, Malta, UK, Austria, Ireland and Luxembourg. Since its creation in April 2012, Volotea has carried more than nine million passengers across Europe and expects to transport 4.4 million in 2017.